It seems hard for Beyonce to escape from plastic surgery rumor. Has Beyonce really had plastic surgery? 35-years-old singer is not too open about cosmetic surgery-related talk. However, noticeable differences on some of her face and body parts make it easier to believe that she has had work done. Beyonce plastic surgery simply attracts public attention, including plastic surgery experts.

Some top plastic surgeons gave their predictions about possible procedures she has taken. What has she possible done? A prominent American plastic surgeon, Dr. Anthony Youn conveyed his view.

The doctor at least saw signs of nose job, lips injection and even facial wrinkles filler. Cited from radaronline.com, Rhinoplasty a.k.a nose job is considered as the reason of her current nose.

“It appears that she’s had a rhinoplasty, causing her nose to look noticeably thinner and refined.”

We can see what doctor meant in Beyonce Before and After pictures. It is not that hard to see her bigger nose when she was young. We can see that the nose wings or nose sides were wider. Her former nose didn’t seem to make her happy and we can’t blame her if she wanted a smaller, better nose shape. Do you think Beyonce’s new nose matches her face?

Beside on nose, enhancement also happened on her lips. Experts hint possible hyaluronic acid fillers such as Juvederm or Restylane has been injected into Queen Bey’s lips. The comparison photos can help us to see that her thinner lips, both upper and lower, have been resized and reshaped into bigger ones.

Injection, however, was not only for her lips. Her wrinkles-free face led rumor that she has also got injectable wrinkles filler for her facial skin. And she could have got any type of wrinkles fillers; hyaluronic acid, collagen, fat or synthetic one.

And not only on face, Beyonce plastic surgery also involves work around her boobs. Beyonce boob job has long been a viral discussion topic on many online media. She may not clearly admit it, but significant volume addition on her boobs reminds us of celebrities with breast implants. Unless you believe that her gene creates such perfect round boobs, you would also agree that she has experienced breast enhancement. 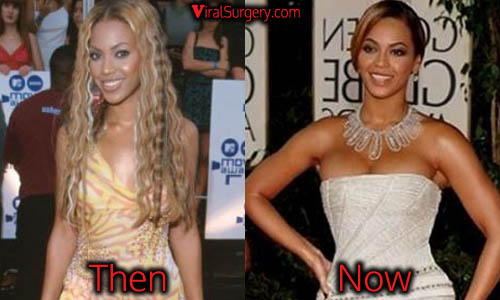 Beyonce Plastic Surgery, Before and After Boob Job Photo

Beyonce before plastic surgery had flatter bust. Jay Z’s wife simply had smaller breasts when she was younger. And story of her boobs changed after she showed new chest appearance where those breasts became bigger than they were. What do you think about her current, 32C boobs size? Do you also think she looks sexier?

Regardless plastic surgery involvement on her face and body we agree that Beyonce is aging well. She is beautiful, and didn’t try to ruin it with overdone nip and tuck like other celebrities did. Let’s hope she doesn’t.