Eiza Gonzalez Plastic Surgery, Before and After Nose Job Pictures 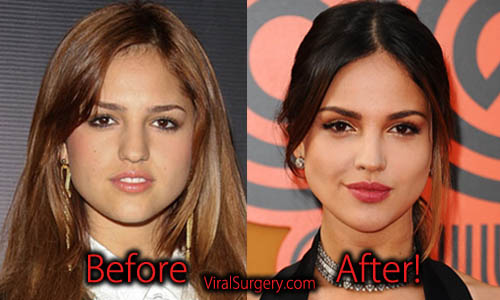 Eiza Gonzalez Plastic Surgery, Before and After Nose Job Picture

Eiza Gonzalez doesn’t seem to need long time to gain fame outside Mexico. Focusing her career in U.S since 2013, 26-year-old Mexican actress who played Santanico Pandemonium in From Dusk till Dawn: The Series has many things to make people more know about her. Well, we are not going to talk about her relationship with some popular men like Liam Hemsworth and Calvin Harris here but another interesting topic; Eiza Gonzalez plastic surgery.

Eiza cosmetic surgery sure not just a rumor. We appreciate her openness admitting that she has had work done. What has she done? Eiza Gonzalez nose job is simply a true fact. As she revealed a few years ago, she had at least had plastic surgery on her nose. And cited from perezhilton.com, she also simply denied having other enhancement procedures.

“The truth is, it’s such a shame that they make up such things, they have a lot of imagination. Tomorrow they’re going to say that I got liposuction! The one thing that I had operated on, and I say it and I’m not going to hide it, is my nose.”

You read it. And we can see result of Eiza Gonzalez nose job easily in the Before and After plastic surgery pictures. She couldn’t hide her big nose when she was younger. She made a good decision. Her nose is far smaller now. Her narrower nose suggests that she had visited professional nose specialist that performed perfect Rhinoplasty (nose surgery).

However, as public believe, nose job is not the only procedure she took. We can understand why many believe that Eiza Gonzalez had performed liposuction instead of normal weight loss. Her face and body changed significantly. While she denied it, some plastic surgery experts even see the possibility of Botox injection, chin implant, and lips injection on her.

The comparison photos can help us to see what experts mean. As they suggest, Botox is possibly in her forehead and around brows area. That explains why those parts appear so smooth. Professional makeup just makes things more perfect.

Eiza Gonzalez Plastic Surgery, Before and After Photo

It appears that injection had also been performed around her lips. It is easy to tell her lips differences in the Before-After pictures. Her fuller lips, upper and lower are believed coming from some lip fillers. Those lips, however, appear with different shape these days. Has she also had lips surgery?

Eiza’s chin is another part that changed drastically. Actress who started debut role as Lola in telenovela Lola…Érase una vez has certainly done something ambitious there. As we can see, she looks so different with her narrower chin. While some of us might think that she had undergone chin or jaw reduction surgery, experts suspect that she has chin implant there.

Next post: Lara Spencer Plastic Surgery, Before and After Botox Pictures